Before we could pick up a pen, we began recording our life story … chapter by chapter, starting with our ancestral heritage and our childhood upbringing.  All that transpired has been etched in our cells and psyche.  The True Self became veiled.

We were trained to believe what we were taught.  Through this, we have embodied a set of rules and values.  We learned that education, money and relationships would bring us happiness. This is the world of conditioning, separation, competition and self-conflict.

Growing up, we learned that everything in the material world is in subject-object relationship: mine-yours; us-them. We learned that you are different from me. Focus was placed on our differences and not our common essence. Through separation we were not always treated and seen through the eyes of love.  Instead, we felt that we did not measure up because harsh judgments left deep wounds.  We withdrew in shame feeling that we were not good enough.  Conditioning strengthened our sense of separate self.

Separation and competition go hand in hand. Good grades gave us brownie points. It became important to study hard and out shine others. We compete to get approval. Wanting to win debates, arguments and comparing ourselves with others, became a part of our nature. The conditioned self is attention-seeking. Competitive behavior became a way of life, passed down from generations, pitting people and nations against each other.

So many have struggled to become what is socially seen as successful.  Yet, we are left with a feeling of failure when we have not met another’s expectations.  Many times we struggle between fulfilling our personal needs versus the desire of others.  We wage an internal war against our own self. Our own deep internal conflict manifests in dis-ease, both emotional and physical.

Blessed are those who realize that permanent peace and contentment are not possible in a world of separation, competition and self-conflict.  This is when a deeper search within begins.  We now feel a call, a mysterious longing that originates beyond conditioning. We now see that the conditioned self never held the answer. But, if we are not who we were conditioned to believe, then, who are we?

Through conditioning we learned who we weren’t and forgot who we are. As an infant, we knew we existed without having to be taught. In our innocence, we experienced life without separation. Innocence is the pure, unmodified sense of “I am” – The True Self – before “I am” became schooled to believe I am this or I am that.  Without being taught, The True Self, can ‘say’, “I am.”  As True Self, there is no separation, competition or self-conflict.  All is one.  One is all. 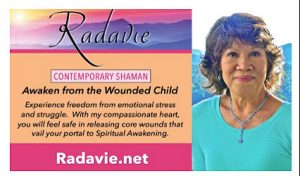 The conditioned self is the veil that separates True Self from Itself.  By unveiling psychological and emotional wounds, we discover our unblemished beauty. The True Self is revealed. It is our birthright. It is ours to claim.  I am here to serve you.